With the return to normal classes now routine again, our attention is focused on our Annual Improvement Plan strategies and the ambitious goals we have for student achievement and improvement. We are committed to improving a culture that promotes learning. How is this achieved you may ask? Three goals are directing our improvement plan this year - each one student-centred, measureable and targeted at empowering student voice and self-efficacy.

Goal 2: Students can articulate their learning for each lesson.

Goal 3: Students receive regular and effective feedback to improve their own learning.

Our 2019 School Improvement Survey Results reflect growth across all domains. Mission, Performance and Service are the three domains that are most important to us when we assess progress. These are outlined below.

Each year, parents, staff and students provide feedback via the School Improvement Survey. This data then assists in determining priority areas for future development. The College continues to move in positive directions through the ongoing support of families and the commitment of staff to implement high-impact practices. The journey is an exciting one!

Congratulations – Patricia Ellis, Aboriginal Elder and Language Teacher at Carroll College
'Congratulations to Trish who was recently appointed to the inaugural NSW Aboriginal Languages Trust Board. Trish is one of nine members of this board and will be representing people in our area.' 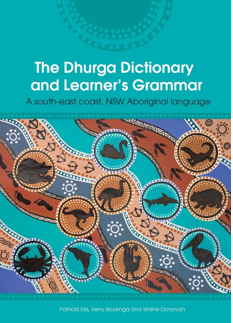 The Dhurga Dictionary and Learner’s Grammar publication is hot off the press! I Congratulate Trish and her siblings, Kerry Boyenga and Waine Donovan on this wonderful achievement. Congratulations from all at Carroll College!

We move into Week 7 next week, which is quite remarkable. Thank you for your assistance in supporting your children with their return to school. It has been more challenging for some students than others. Please know we are supporting all children as they readjust to the rigour of College expectations. Please be in contact if you have concerns or require support from the College.

Year 11 Academic Reports have been finalised and can be accessed via the Parent Portal in Sentral today. I have had the privilege of reading reports and would like to congratulate Year 11 students on their efforts in their first semester of Year 11. Well done!

Enjoy a lovely long weekend ahead.

PLease find below the link for 2020 HSC Trial dates.

The Year 7 and Year 10 immunisations have been rescheduled to Wednesday 17 June. NSW Health will be at the College to administer the vaccinations after they were postponed in Term 1 due to COVID-19.

Students receiving the immunisation can wear their sports uniform to school. The nurses ask students to have breakfast on vaccination day and if your child is nervous about receiving their immunisation, they can speak to their class teacher about going first.

If you have any questions, please do not hesitate to contact the College.

Uniform Changes for students who have PDHPE practical lessons

Our annual Carroll College Cross Country will be held on Thursday the 18th of June. Due to the current situation with Covid-19, we are unable to hold our carnival in the traditional format. Students will run races during set times throughout the day at Carroll College. The event is for serious runners only and is not compulsory. All other students will remain in normal classes throughout the day. Ribbons and age champions will be awarded on the day. Unfortunately there will be no Archdiocesan Cross Country this year.

Details of the day are as follows:

Runners are permitted to wear full sports uniform on the day. Athletic shoes must be worn (no rabens, slip ons etc). Students should also bring a hat and water bottle. All non-runners are to wear full school uniform.

Unfortunately due to the current guidelines, parents will be unable to attend the school to watch their child/children compete.

Please keep the following family in your prayers, Madison Bull (Year 8) on the passing of her Grandmother.

Our Superpower is our ability to cooperate

How many parents reading this article can remember studying “Lord of the Flies” at school? I have been influenced by it, particularly its bleak and unremitting assertion that we should weep, “For the loss of innocence, the darkness in man’s heart…”

On the very first day, the boys institute a democracy of sorts. One boy, Ralph, is elected to be the group’s leader. Athletic, charismatic and handsome, his game plan is simple: 1) Have fun. 2) Survive. 3) Make smoke signals for passing ships. Number one is a success. The others? Not so much. The boys are more interested in feasting and frolicking than in tending the fire. Before long, they have begun painting their faces. Casting off their clothes. They develop overpowering urges – to pinch, to kick, to bite, to kill.

The novel is fiction yet it has coloured our notions of how humankind acts when placed in a traumatic context (a war, a pandemic for instance).  Rutger Bregman researched Golding’s life and learned what an unhappy individual he had been: an alcoholic, prone to depression. “I have always understood the Nazis,” Golding confessed, “because I am of that sort by nature.” It was “partly out of that sad self-knowledge” that he wrote Lord of the Flies.

Bregman researched a little known story and found that there is real surprise here. After trawling the web for a while, he came across an obscure blog that told an arresting story: “One day, in 1977, six boys set out from Tonga on a fishing trip ... Caught in a huge storm, the boys were shipwrecked on a deserted island. What do they do, this little tribe? They made a pact never to quarrel.”

The six boys survived for a year on a rocky islet south of Tonga, an island group in the Pacific Ocean called Ata. Unlike the fictional novel, they cooperated, took time out when their emotions were frayed and even provided medical help for an injured boy.

Bregman has raised a very interesting question in his book. What is our default nature- savagery or cooperation? Was the fact that the boys were from a culture that specifically taught the importance of relying on “community” that allowed them to survive nobly unlike the appalling experience of the English boarding school boys.

Peter Warner, the skipper who rescued them and one of the boys Mano Totau are good friends all these years later. They both live in Queensland.

During the C-19 lockdown, we have witnessed random acts of kindness; creative video clips to keep people’s spirits up and tips on self-reliance and relieving boredom. Yes, there were some fights over toilet paper and illegal assemblies but it seemed that they were seriously outweighed by cooperation and kindness. 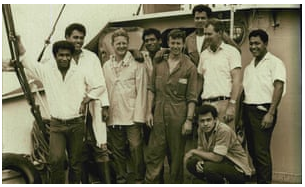 It is time we told a different kind of story. The real Lord of the Flies is a tale of friendship and loyalty; one that illustrates how much stronger we are if we can lean on each other. After my wife took Peter’s picture, he turned to a cabinet and rummaged around for a bit, then drew out a heavy stack of papers that he laid in my hands. His memoirs, he explained, written for his children and grandchildren. I looked down at the first page. “Life has taught me a great deal,” it began, “including the lesson that you should always look for what is good and positive in people.”

How true the quote: “I have been searching for ways to heal myself and found that kindness is the best way”. I think recent events prove that our “better angels” will ultimately prevail.

Careers have launched a new Careers - Carroll College, Broulee Facebook page. Please go to the attached link, like and share the page. All things Careers, HSC, ATAR, UAC and much more will be placed on this page. All students from Year 7-12 are encouraged to like this page if they have a Facebook account.

Work Experience and Work Placement - has been cancelled for the time being due to Covid-19. Parents and students will be informed as soon as we have permission to send students on their placements.

Year 12 should be accessing the Admin Google Classrooms page to keep up to date with information regarding their HSC. This information can also be located on the new Facebook page.

Please do not hesitate to contact me for further information or clarification at Karen.lyttle@cg.catholic.edu.au

It has been an enthusiastic welcome back to cooking this week. Our Year 11’s have been busy making White Chocolate puddings with Berry coulis and Year 12 students, Ruby Lyttle and Ethan Hanson completed their Head Chef assessment tasks. 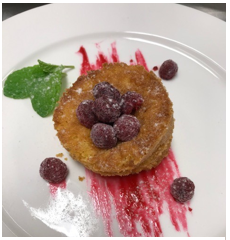 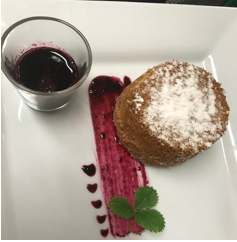 Have you applied for the Creative Kids Voucher for your child yet? This exciting initiative gives parents $100 per child to spend towards music or other creative lessons or activities. This may be the perfect time for your son or daughter to begin private music lessons with one of our tutors that teach during school time. Most of our tutors are Creative Kids Providers so that you can use your voucher to pay for $100 of lessons.

Creative Kids Vouchers can be applied for at https://www.service.nsw.gov.au/transaction/apply-creative-kids-voucher

You will receive your Creative Kids Voucher by email. Once you have received it, you can forward it to the teacher of your choice for payment. You will need to ensure that the teacher is a Creative Kids Provider before you do this. 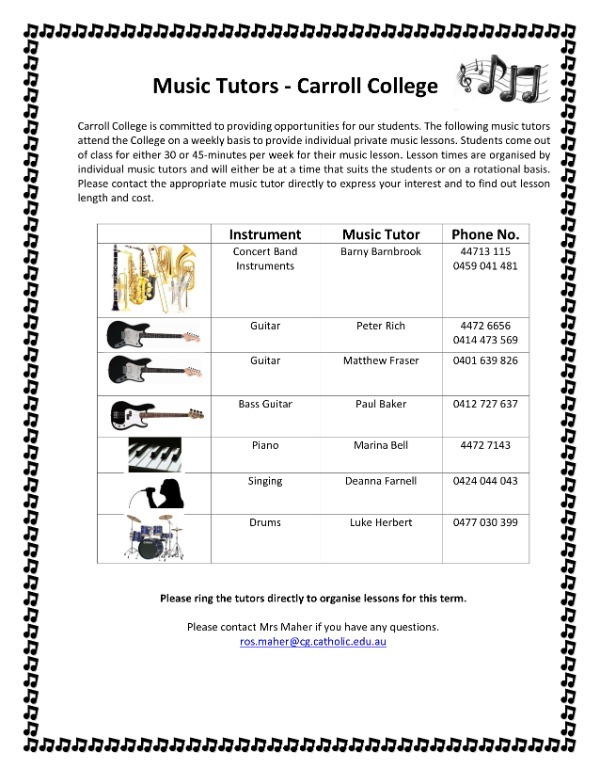 College Beanies and Scarves are now available to purchase via Qkr or from the College canteen for $10 each. 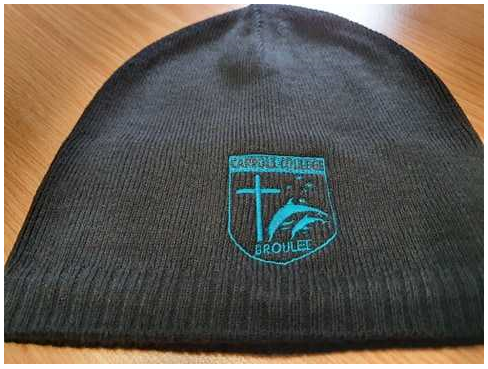 Term 2 fee statements were emailed on Friday 22 May with a due date of Friday 3 July (end of this term).

If you have completed a Concession Application, this process is currently underway. Please note that delays have been experienced this year due to the Bushfires and Covid-19. The Fee Committee will be meeting shortly to review Concession applications. The outcome is advised to applicants as soon as this meeting takes place and this will occur during Week 8 (19 June) this term.  The Fee Committee convenes once a term to review all concession applications. If you have provided a concession application to the College, you may sometimes be asked to supply additional supporting information. All information is treated and maintained confidentially.

If your family has been impacted by COVID-19, through the loss of your primary source of income or livelihood through redundancy, stand down, reduction in hours, carer’s responsibilities, health issues, business closure and/or reduced turnover or other related impact - please contact Rhonda Forner, Business Manager by email at Rhonda.Forner@cg.catholic.edu.au to request a COVID-19 Fee Assistance Request Form.

If you require financial assistance due to any other hardship (e.g. low income, health or other hardship) not related to COVID-19 including Bushfires, please contact Rhonda Forner, Business Manager by email at Rhonda.Forner@cg.catholic.edu.au

COVID 19 Financial Survival Guide
Please be aware that you are not alone and there are resources available to assist you and your family at this time. Listed below are some of those resources for information.

Financial Institutions are also offering a range of assistance to account holders, homeowners and businesses. Please enquire with your financial institution to access financial support such as:

Please be aware that there are some financial scams relating to Coronavirus. These may be in the form of text messages, emails or phone calls. The best approach is to not provide any of your financial information. If you suspect you have been contacted as part of a scam, you can report it to scamwatch – scamwatch.com.au/report-a-scam and the police.

For additional support, other services available include:

Qkr Functionality Update for users not able to Connect to Server

Reinstall the App to apply the current changes. You may need to reset your password.